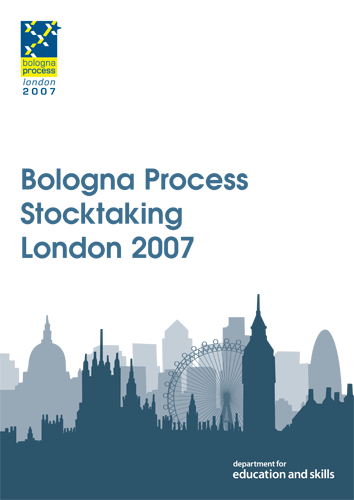 Report from a working group appointed by the Bologna Follow-up Group to the Ministerial Conference in London, May 2007.

In their Bergen Communiqué, Ministers requested the continuing and widening of the stocktaking process. In the fields of the degree system, quality assurance and recognition of degrees and study periods, stocktaking had to include several new issues such as reflecting on three cycles rather than two, implementation of national qualifications frameworks, Standards and Guidelines for Quality Assurance in the EHEA, as well as the principles of the Lisbon Recognition Convention.

Stocktaking had to be widened to include several new areas: flexible learning paths in higher education, procedures for the recognition of prior learning, and awarding and recognition of joint degrees.

The Stocktaking Working Group drew up, and BFUG approved, a list of twelve indicators 6 covering most of the above issues, and proposed to cover in the text of the stocktaking report those aspects that were not appropriate to be reflected in the scorecard. According to the Ministers’ statement that the work on the first three priority areas should be largely completed by 2007, the criteria for stocktaking indicators in these areas were made more demanding to measure the success against the final goals rather than checking whether the work had been started. In order to have comparable information from all countries, the Working Group prepared a template for national reports.

The main sources of information for stocktaking were the national reports and Eurydice. For the recognition issues, national action plans on recognition were used as well. The outcomes were cross-checked with the results of EUA Trends V study and ESIB survey, Bologna With Student Eyes.

The main outcomes of stocktaking are the following:

Outline of the 2007 stocktaking report

This report on the Bologna Process stocktaking was prepared for the London Ministerial meeting in May 2007. The report has three parts.

There are three main findings from the 2007 stocktaking:

In order to realise the objectives set by the Ministers, the Working Group shall:

The Working Group will be supported in its task by the Secretariat, and shall draw on expertise as it considers appropriate.

The Group shall submit reports to the BFUG, and shall make its draft reports and other relevant documents accessible for all BFUG members on the web.

EUA shall participate in the work for stocktaking through delegating an expert.

The working group can decide to select more organizations to participate as experts in its meetings.

The work on the 2007 Bologna Process stocktaking was supported by the European Commission, both through the Socrates Programme and by facilitating analysis of data from the ‘non-Socrates’ countries by Eurydice European Unit. The Working Group would like to thank Eurydice and the European University Association (EUA) for supporting their representatives’ participation in the Working Group. This ensured that the stocktaking was informed by the results of Eurydice Focus on the Structure of Higher Education in Europe and the EUA Trends V studies. We also thank the Council of Europe for its generous support.